William Kentridge (1955) is a South African contemporary artist known for his prints, drawings, and animated films. The exhibition That Which Is Not Drawn at the CCCB until February 21st, 2021 is a unique chance to see some of Kentridge’s iconic works: large-format tapestries and the full series of 11 short animation films, Drawings for Projection.

The films are made with a laborious artisanal animation technique. Kentridge creates charcoal and pastel drawings that he modifies by erasing, redrawing and reworking the elements. He films each stage of the process and modifies it continuously, allowing wrinkles and “ghostly traces” of the previous marks on the sheet. In this way, he reinforces the importance of passage of time, memory and forgetfulness in his discourse.

Begun in 1989 and still in progress, the Drawings for Projection series of short films established William Kentridge in the contemporary art scene as a leading figure in the efforts to address the traumatic memory of South Africa. Using two seemingly antithetical figures—the industrialist Soho Eckstein and the poet Felix Teitlebaum; the two parts, perhaps of a single split personality—the artist combines his own reflections with the echoes of a collective history of Johannesburg during the apartheid years.

However, Kentridge warns against literal interpretations of his work, “I have never tried to make illustrations of apartheid,” he once commented, “but the drawings and films are certainly spawned by and feed off of the brutalized society left in its wake. I am interested in a political art, that is to say an art of ambiguity, contradiction, uncompleted gestures and uncertain endings.”

As someone who is ethnically Jewish in South Africa, Kentridge has a unique position as a third-party observer. His parents were both activists and lawyers, famous for their defense of victims of apartheid. Kentridge developed an ability to remove himself somewhat from the atrocities committed under the later regimes.

European premiere of the complete series of short films

The exhibition presents the complete series of 11 animated films for the very first time in Europe. Kentridge completed City Deep, the eleventh film in the project, during confinement in spring 2020.

As you make your way through the dark maze of film screenings, you can read about the basics of South Africa's socio-political history in order to fully grasp Kentridge’s works.

The exhibition also includes seven drawings on paper that demonstrate the laborious creative process of the films, as well as a selection of nine large-format tapestries, which the artist produces in collaboration with the Stephens Tapestry Studio in Johannesburg. 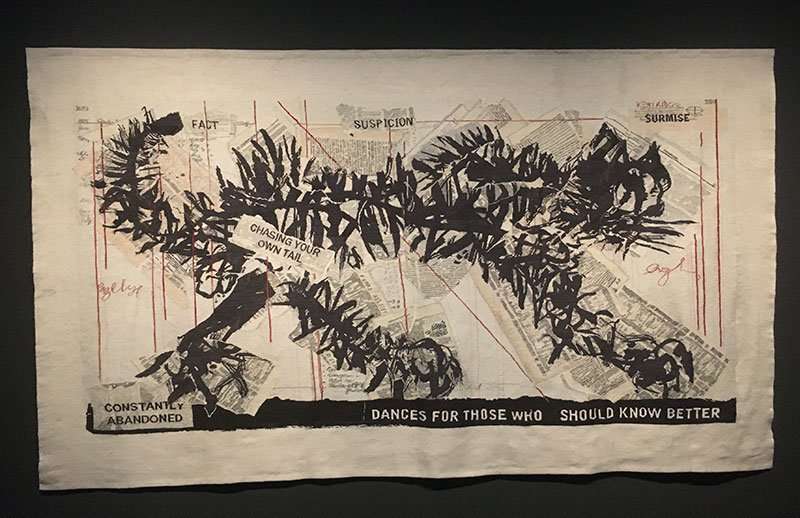 The tapestries feature dark silhouettes, recognizable figures that appear throughout Kentridge’s work. They show images of people carrying loads (refugees, demonstrators, pilgrims), for the author symbolizing the crises, wars and problems that plague South Africa and the rest of the world. There is a subtle continuity between the tapestries and the animated works.

We recommend getting your tickets online beforehand.