Is it any wonder why the surge in digital wonders and fast-paced society is coinciding with a surge in people returning to arts and crafts?

Today, more than ever before, people are overwhelmed by their own lives. The 24/7 connection, pressures and demands of our newly created digital world has also created a need for new antidotes and therapies.

Activities such as cooking and gardening, as well as arts and crafts such as ceramics, woodwork, metal work, knitting and weaving require repetitive actions and a skill level that can always be improved upon. According to Mihaly Csikszentmihalyi, the famous psychologist who coined the term “flow state” in 1975, activities that require a balance between skill and challenge allow us to slip into “the zone,” or flow state.

Flow is the mental state of operation in which a person performing an activity is fully immersed in a feeling of energized focus, full involvement, and enjoyment in the process of the activity. In essence, flow is characterized by the complete absorption in what one does, and a resulting loss in one's sense of space and time.

There are six factors identified in the flow experience:

Those aspects can appear independently of each other, but only in combination do they constitute a flow experience.

In recent years there have been a number of best-selling books such as The Rise of Superman and Stealing Fire that continue the discussion and latest research about flow states. (Ironically, these books are very popular in Silicon Valley, where most of our modern day stresses and distractions originate.)

The history of craft as therapy

Arts and crafts activities have been a core part of occupational therapy, which emerged as a mental health field around the end of WWI in response to the needs of returning soldiers. Those suffering from Post-Traumatic Stress Disorder (or “shell shock” as it was previously known) found great comfort in knitting, basket weaving, and other craft activities. 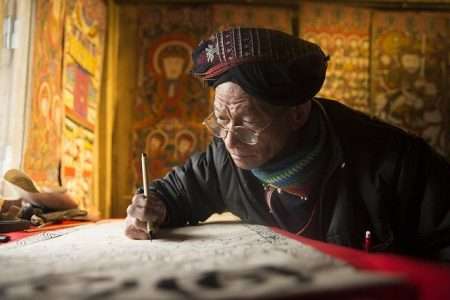 This connection between craft and wellness already existed in ancient times, notably in some Eastern religions such as Buddhism.

Having lost touch with our handmade traditions, today’s modern societies have been re-discovering the connection between craft, body and mind throughout the last century. Art therapy was officially founded as an independent science in the United States in the late 1960’s.

The research into the physical and mental health benefits of craft remains largely qualitative and based on self-reporting. More scientific studies are needed to support research and funding.

That said, here are a couple examples where crafting has shown positive results.

In studies of people with chronic fatigue syndrome (CFS/ME), depression and other long-term health problems, textile crafts were found to increase sufferers’ self-esteem, their engagement with the wider world, and increase their personal sense of well-being and their ability to live positively with their condition.

A large-scale international online survey of knitters found respondents reported they derived a wide range of perceived psychological benefits from the practice: relaxation; relief from stress; a sense of accomplishment; connection to tradition; increased happiness; reduced anxiety; enhanced confidence, as well as cognitive abilities (improved memory, concentration and ability to think through problems).


What links many studies on the health benefits of crafting, is that while crafting seems to be a relatively private activity, the benefits substantially arise from the social connections that craft enables.

One of the great things about a craft practice is precisely that it can be both solitary and collective—it’s up to the individual to decide.

For the shy, the ill, or those suffering from various forms of social anxiety, this control, along with the capacity to draw away from their discomfort and instead focus on the process of making, is a much valued quality of their craft practice.

If you're interested in finding arts and crafts in Barcelona, check out our list of events and classes or check out this article on 8 ways to get creative in Barcelona.