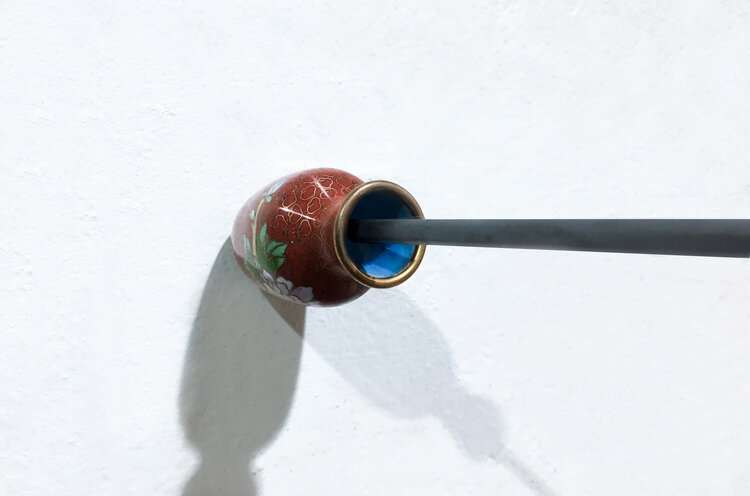 The territory of memory shelters stories that were never told, stories that subjectivise our identity and speculate about our being. Hidden in decontextualised containers and without any attempt of categorisation, lie these stories that can only be perceived by the subjectivity of those who are approaching. They are invisible, ethereal, powerful and constant. Mundane but strange – stories that determine, coerce and modify.

The discomfort that emerges from the strangeness, works as a catalyst for questioning our own identity. In the territory of the Strange, we create rituals that aim to free us from the deep burdens of our hidden stories. These intimate rituals lull our burdens but do not allow us to deal with our Strangeness, and above all, it prevents us from seeing them in relation to others. We carry stories that we keep silent, that differentiate and unify us, that we ritualise to the point of (almost) making them myths.

The arrangement of the work within the exhibition space then serves as a “place of manifestation” for these stories, so that, even if they are still invisible, we recognise the containers where we house them, thus giving them, at least, a place of rest.

In the Strangeness we find ourselves, keeping our untold stories in small containers, but recognising that it is they who speak for us, who even when we do not realise it, they shape our own identity.

Felipe García Salazar is a visual artist and cultural manager. He graduated from the School of Visual Arts in New York, with a Master in Production and Artistic Research from the University of Barcelona.

His work explores, in an autobiographical way, his relationship with time, history and his own identity. Through installation work Felipe seeks to create spaces for thought and dialogue with the viewer, and invites us to reflect on the contemporary status quo and what we understand as reality.

Felipe has been awarded artistic residency programmes in New York, Buenos Aires, Guanlan and Budapest and his work is part of public and private collections in the United States, Argentina, Colombia, Spain, Belgium and Hungary.